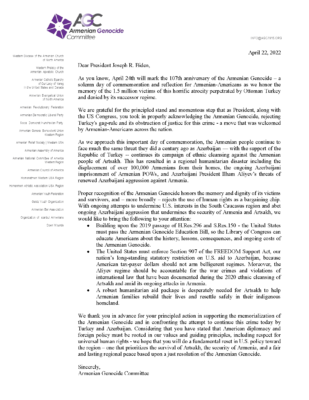 As you know, April 24th will mark the 107th anniversary of the Armenian Genocide – a solemn day of commemoration and reflection for Armenian-Americans as we honor the memory of the 1.5 million victims of this horrific atrocity perpetrated by Ottoman Turkey and denied by its successor regime.

We are grateful for the principled stand and momentous step that as President, along with the US Congress, you took in properly acknowledging the Armenian Genocide, rejecting Turkey’s gag-rule and its obstruction of justice for this crime – a move that was welcomed by Armenian-Americans across the nation.

As we approach this important day of commemoration, the Armenian people continue to face much the same threat they did a century ago as Azerbaijan — with the support of the Republic of Turkey — continues its campaign of ethnic cleansing against the Armenian people of Artsakh. This has resulted in a regional humanitarian disaster including the displacement of over 100,000 Armenians from their homes, the ongoing Azerbaijani imprisonment of Armenian POWs, and Azerbaijani President Ilham Aliyev’s threats of renewed Azerbaijani aggression against Armenia.

Proper recognition of the Armenian Genocide honors the memory and dignity of its victims and survivors, and – more broadly – rejects the use of human rights as a bargaining chip. With ongoing attempts to undermine U.S. interests in the South Caucasus region and abet ongoing Azerbaijani aggression that undermines the security of Armenia and Artsakh, we would like to bring the following to your attention:

We thank you in advance for your principled action in supporting the memorialization of the Armenian Genocide and in confronting the attempt to continue this crime today by Turkey and Azerbaijan. Considering that you have stated that American diplomacy and foreign policy must be rooted in our values and guiding principles, including respect for universal human rights – we hope that you will do a fundamental reset in U.S. policy toward the region – one that prioritizes the survival of Artsakh, the security of Armenia, and a fair and lasting regional peace based upon a just resolution of the Armenian Genocide.

Funding for Armenia and Artsakh in the Omnibus Spending Bill Secured